Gun violence remains a problem, but NOLA for Life has had real impact 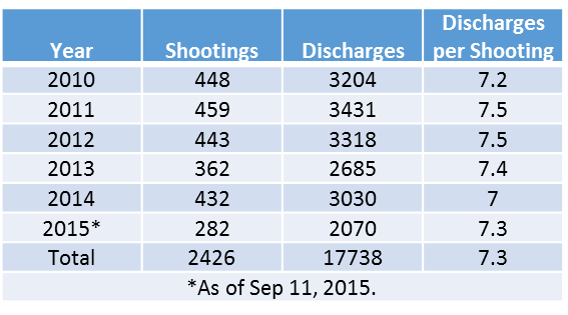 It has been nearly three years since New Orleans began NOLA for Life and the Gang Violence Reduction Strategy, which I have previously argued played a large role in in the city’s drop in gun violence in 2013. The August gun violence update post introduced reports of firearm discharges as a way to strip out randomness and measure gun violence more accurately from month to month. Measuring firearm discharges from 2010 to 2015 removes the effects of randomness and allows for a fuller evaluation of gun violence in New Orleans before and after NOLA for Life’s implementation.

This analysis shows New Orleans has sustained a roughly 13 percent drop in overall gun violence since the beginning of 2013 relative to 2010 – 2012 gun violence levels. It piggybacks on the research of a recent academic report showing the impact of focused deterrence on murder in New Orleans in 2013 and 2014. Evaluating gun violence based on firearm discharges also suggests New Orleans will likely experience fewer murders in 2016 should gun violence levels remain where they’ve been for the last two years.

Over time, the total number of reports of a firearm being discharged (signal 94 in Calls for Service) matches up really well with the number of shooting incidents in that given year. Running a correlation of shootings by year and firearm discharge reports by year from 2010 to 2015 shows the two numbers are closely intertwined.

Firearm discharge reports, therefore, can be seen as a good representation of gun violence in New Orleans because they ignore the many factors that influence whether a bullet hits a person and whether that shot is fatal. Randomness has played a huge factor in New Orleans’ murder totals in 2014 and 2015, focusing on firearm discharges in this manner allows us to strip all of that away.

Establishing the expected ratio of firearm discharge reports per shooting identifies areas where luck probably increased or decreased the city’s shooting totals. 2014 is the most glaring example of New Orleans experiencing more shootings than expected given the number of discharges.

Using the expected ratio produced above we can estimate how many shootings would be expected in an average year based on the number of firearm discharge reports there were that year. The results, produced below, shows that New Orleans experienced about 17 more shootings in 2014 than would have been expected. But in 2015, the numbers are more in line with historical trends; New Orleans is on pace for about two fewer shootings than would be expected, given the number of discharges.

Rather than a massive jump in gun violence this year, this table highlights how random factors kept murder down in 2014 and are bringing it up in 2015. Although 2015 is on pace for fewer shootings than were expected in 2014, it should be on pace for a similar murder total due to more non-gun homicides.

Both my own previous work and that of Corsaro and Engel have shown the impact of NOLA for Life’s anti-gang initiatives. Adding this new work in makes it clear that the three years before NOLA for Life were about 13 percent more violent than the nearly three years after have been.

This is good news in the sense that the city’s focused deterrence strategy has reduced gun violence. One positive this analysis produces is the inherent likelihood that 2015 is an outlier in terms of murder numbers. Murder should fall in 2016 assuming the success of the last three years holds.

Gun violence, however, remains arguably the most important issue facing New Orleans, and it is essential to find ways to capitalize on the city’s initial success. A 13 percent drop in gun violence is a good start, but there remains a long way to go.

This post was previously published by The New Orleans Advocate.