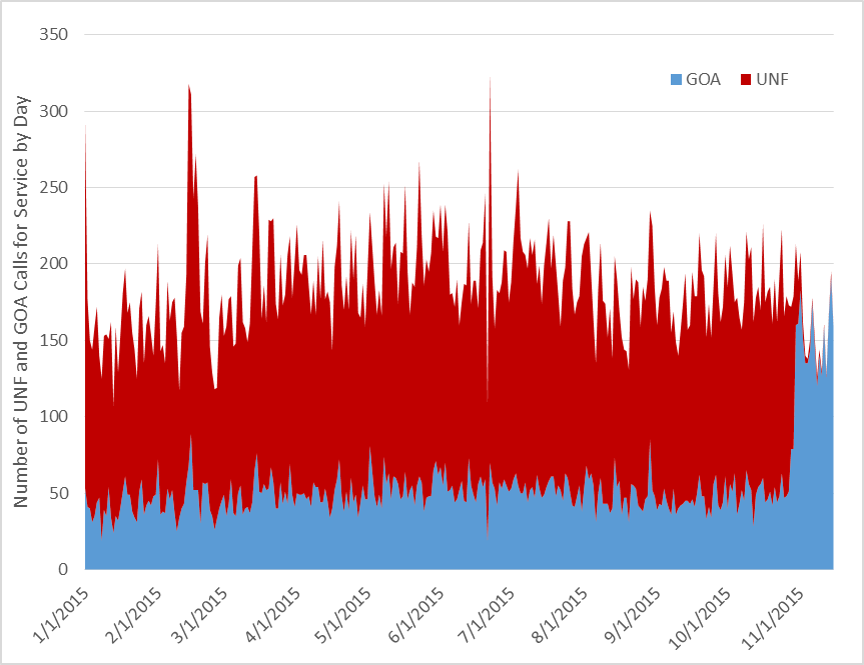 Much has been made of NOPD’s response time issues and the impact long response times have had on crimes being deemed ‘unfounded’ (UNF). NOPD Chief Michael Harrison responded by changing NOPD’s policy so that officers arriving on a scene with no victim would mark the incident ‘Gone on Arrival’ (GOA) rather than UNF.

A disposition of GOA requires more scrutiny and additional effort to contact the victim which, in theory, should result in more incidents ultimately being marked ‘Report to Follow’ (RTF). It has only been a few weeks since the “NOPD: Call Waiting” series ran in The New Orleans Advocate and on WWL-TV, but there is sufficient data available to see clear changes in NOPD operations.

The policy change of marking crimes GOA rather than UNF had an observable impact almost immediately. This is seen in the below graph of the number of Calls for Service marked GOA and UNF for each day of 2015.

The use of the UNF disposition has almost ceased entirely since early November, as only 45 total incidents have been marked UNF between Nov. 3-15.

At the other end of the spectrum, fewer UNF dispositions and more GOA dispositions may be feeding an increase in incidents marked RTF. An average of 241 incidents a day since Oct. 28 have received an RTF disposition, compared to 226 a day between Jan. 1 and Oct. 27. The number of Calls for Service marked RTF between Oct. 29 and Nov. 11 was higher than any two-week period outside of Mardi Gras. This is shown in the below chart of the rolling average number of RTF (blue line) and UNF and GOA (red line) dispositions over two weeks.

The drop in UNF and GOA dispositions is fairly clear. Whether the rise and slight dip in RTF dispositions in late October and early November is the sign of a larger trend remains to be seen. It’s worth noting that the number of all calls for service per day has dropped since the end of October. The median number of total calls for service from January 1 to October 27 was 1209 but the median has fallen to 1171 since October 27. The sample size is still too small to know what, if anything, this drop in calls might mean, but the percentage of all calls being marked RTF is about 2 percent higher than it was before October 27 and the percentage of calls being marked UNF or GOA is 2 percent lower.

A final way of evaluating changing NOPD performance is by tracking average response time. The below chart shows the average response over two weeks to a likely Uniform Crime Report Part I crime regardless of disposition.

As can be seen, average response times peaked over the summer at nearly six hours. They have hovered since then at between just under three hours and four and a half hours. Response times actually spiked in October before falling over the latter half of the month and remaining steady right at around three hours since the “NOPD: Call Waiting” series ran.

The average response time is still unacceptably high, but the above chart suggests a downward trend which — if maintained — would be a positive development.

It has only been a few weeks since the “Call Waiting” series focused public attention on skyrocketing NOPD response times, and the way that they impact how the NOPD counts crimes. Only a fraction of calls for service are for UCR Part I crimes, so the fact that an extra 15 to 20 incidents are being investigated each day is unlikely to dramatically drive up the official crime statistics reported to the FBI.

NOPD’s policy changes in the wake of the response time series are clearly having a positive impact. Simply marking crimes with a different disposition, however, is not the end goal — solving crimes is. Thus it is critical to ensure that calls for service are investigated to the fullest extent possible. The worst of the crisis appears to be past though a lot of work clearly still needs to be done.

NOPD chat replay: Who’s to blame for skyrocketing response times? What can be done to fix issues?

This post was originally published by The New Orleans Advocate.