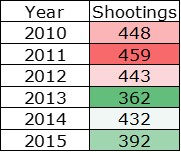 Evaluating the state of crime in New Orleans is difficult because crime is a complex topic. The city’s official crime statistics will probably show a decrease of roughly 6 percent, according to preliminary information from the city, but previous analysis has shown that figure to be unreliable due to more crimes being marked unfounded. Murder rose in 2015, but regular readers will know that I consider murder to be a bad statistic for measuring gun violence.

Rather than trying to fit a square peg into a round hole by explaining whether crime is up or down, breaking crime into different categories can help describe the state of crime at the end of 2015.

The state of crime in New Orleans, therefore, can be broken up into seven distinct trends or themes.

Trend #1 – Shootings Are Down

Let’s get the first major trend out of the way before moving on to trends 2-7. Shootings are down in New Orleans. I have written about it several times before, but shooting incidents dropped roughly 10 percent from 2014 to 2015. This past year was only the second since 2010 with fewer than 400 shootings, and the data suggest that the 10 percent rise in murder from 2014 to 2015 was largely a result of changing luck rather than changing gun violence levels.

The remaining six trends were identified by analyzing Calls for Service data from 2010 to 2015. Each trend compares 2015 totals to both the average and standard deviation of each type of call from 2010 to 2014.

Looking at all Calls for Service in this manner is actually a pretty good way of cutting through the noise to analyze whether crime went up or down in 2015 in New Orleans. I took all 142 incident types in 2015 that were also used from 2010 to 2014 and compared 2015 levels to their 2010 to 2014 average. Of those 142 incident types, 80 had more calls in 2015 than they averaged from 2010 to 2014 while only 62 had fewer. Of likely FBI Uniform Crime Report Part I crimes, 25 incident types saw an increase in Calls for Service in 2015 while only 8 saw a decrease. This initial analysis is shown in the table below.

Rather than relying on official statistics that can be deflated bymanpower and response times, this method provides an easy way of analyzing general crime patterns.

With that as background, let’s dive into the rest of the trends.

The rise in rape and sexual assaults is just as dramatic as the rise in armed robberies in New Orleans, although it may not inherently reflect more crimes taking place. Experts have noted that NOPD reforms may be driving increased reporting, so the change may reflect more public trust rather than more incidents occurring.

Domestic incidents are increasing in similar fashion to rapes and sexual assaults. The evidence suggests that this increase may be the result of a change in reporting practices. A disturbance, for example, was more likely to be marked as a domestic disturbance in 2015 than from 2010 to 2014. A future analysis will cover this topic as it relates to the consent decree.

Both NOPD and the Mayor’s Office have trumpeted efforts to reduce the number of arrests the police make for minor offenses. Officers are supposed to issue a summons whenever possible, and the Calls for Service data bears out the success of this policy change. Attachments (essentially arrests) of all kinds are down, while stop and release (presumably with a summons) are up over 1,000 percent.

I’ve written about this in the past, but measures of police proactivity such as curfew violations, DUIs and drug violations are excellent metrics for evaluating the full impact of NOPD’s manpower decline. Before response times skyrocketed, before crimes were being marked unfounded with alarming frequency there were the falling measures of procativity. Improving capability in these areas will be a sign of a police force that is capable of proactive action rather than just responding from one emergency to the next.

Two incident type trends jump out as being of interest without an obvious explanation. Unclassified deaths (signal 29U) are up nearly threefold from where they were on average from 2010 to 2013, and “officer needs assistance” (signal 108) calls were up substantially in 2015. These changes defy simple explanation, so more research in 2016 will hopefully help identify potential causes.

This post was previously published by The New Orleans Advocate.