Revisiting this metric nearly two months later suggests that the rise in New Orleans gun violence over the last six months has been due to more gunfire on the streets rather than a streak of bad luck.

As I mentioned in the last article, just measuring shootings misses a lot of gunfire that has no injured victim. A comparison of firearm discharge reports and shooting incidents since the start of 2010 shows that there are roughly 7 of the former for every 1 of the latter. This figure fluctuates up and down over time as there are more or fewer shooting victims per firearm discharge report than expected.

Both the actual and expected number of shootings have jumped up over the last six months reaching levels last seen before NOLA for Life was begun. That’s worrisome. Shootings jumped from 362 in 2013 to 432 in 2014 but the firearm discharge reports suggested this was partially due randomness-driven to bad luck.

Measuring our luck can be achieved by subtracting the actual number of shootings observed over a given timeframe from the expected shooting total. As can be seen, the difference in these measures peaked at the end of August. 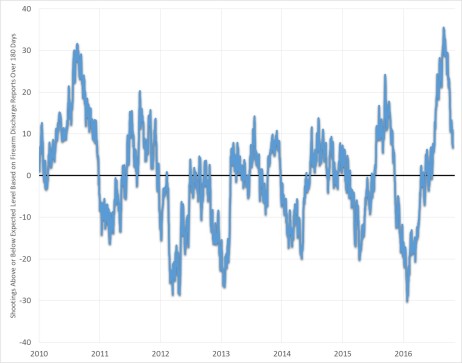 The summer of 2016 was the worst on record in terms of gun violence, but looking at it this way suggests it was at least partially driven by bad luck. There were 35 more shootings in New Orleans than expected between March and the end of August 2016 but only 6 more than expected between the end of April and late October. The last time this many shootings were expected in New Orleans over 6 months was August 2012 to February 2013 before NOLA for Life really got rolling.

These data strongly suggest that shootings will occur less frequently than expected over the next six months, but the number of expected shootings has been driven higher by more firearm discharge reports.

Maybe this is the peak of an unexplainable one-time jump in gun violence here.

But if it isn’t then it will be evidence that the effect of NOLA for Life will have mostly worn off. The change in gun violence patterns in New Orleans over the last few months is worrisome. Hopefully it is a short term trend, but if not it will likely require the implementation of new strategies and tactics to combat.