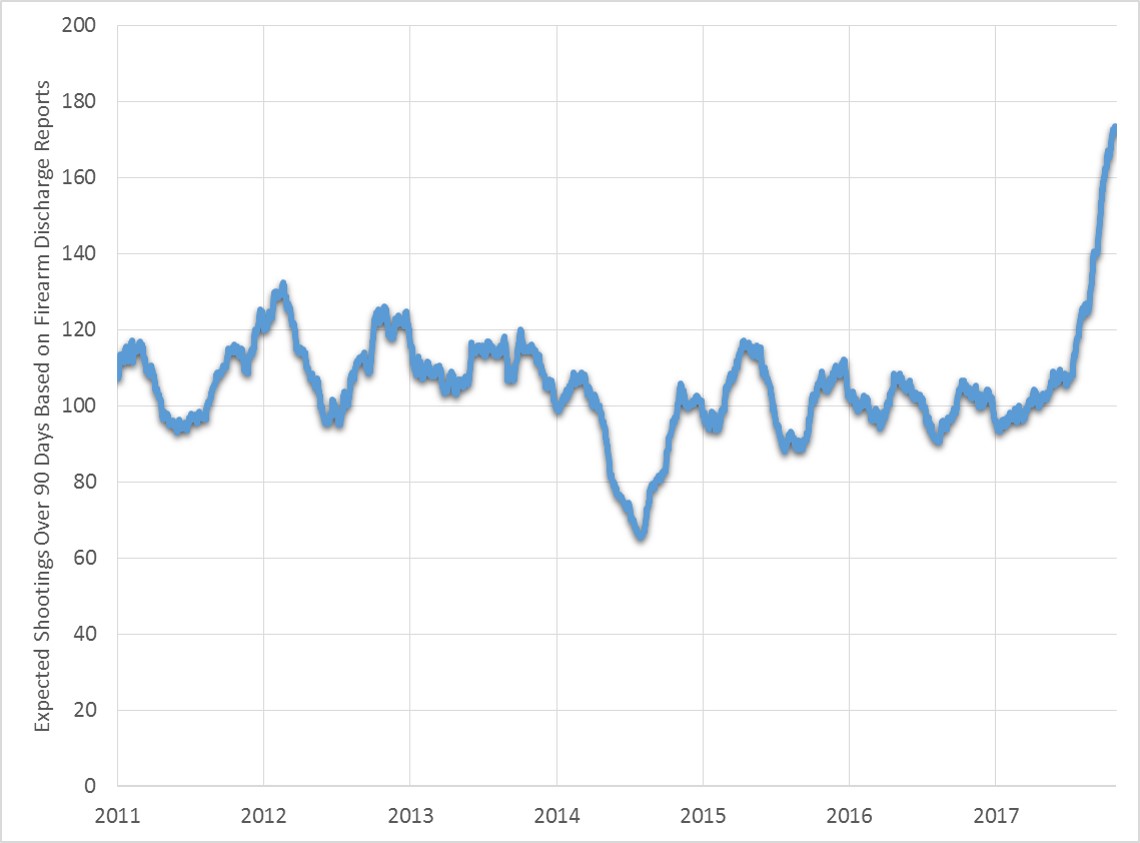 The ‘expected shooting’ statistic is one that I follow regularly on my excel but don’t post a ton about because I don’t have quite as much confidence in it as an accurate measurement compared to shooting incidents and murders which produce actual victims. If you’re unfamiliar with the statistic I posted about it a few weeks ago in my 2017 gun violence forecast.

The short description: a lot of gun violence occurs where a shooter misses his/her target that is not reported by the victim. If a shooter misses a target who calls 911 then that’s an aggravated assault, but if a neighbor hears the shots and calls 911 then it’s a signal 94 (discharging firearm). Measuring signal 94s over time shows the ratio of firearm discharge reports to actual shootings is consistently 7 to 1 over time. The theory goes, therefore, that measuring firearm discharge reports will provide a truer measure of gun violence in New Orleans by stripping out the randomness and luck that determines whether a bullet strikes a victim after leaving a gun.

It’s a good metric for identifying trends, but it’s not as “scientific” as counting actual victims. I’m pretty sure it strips out randomness, but there could be other factors that also explain some of the differentiation between actual and expected shootings.

The two tables below show the actual count of shooting incidents in New Orleans over 90 days (left) and the expected shooting count over 90 days (right). The latter is the number of firearm discharge reports over 90 days divided by 7 (or 6.997393 to be precise), and I’ve “smoothed” out New Year’s Day and Eve as well as the days around July 4th to avoid fireworks from biasing the results. The correlation between actual and expected shootings over 90 days is relatively strong (r = .75) though not as strong as the near-perfect correlation between the 365 day counts of each (r = .93).

The actual shooting count shows a spike in shootings in the summer of 2015 and a dip in shootings at the end of 2015 before shootings shot up dramatically beginning July 2016 which continues through today.

More worrisome is the end of the expected shooting count. The rise in gun violence since the summer of 2016 is there, but it’s smoother and larger than the actual shooting chart. We had 104 actual as well as expected shooting incidents in New Orleans in the 90 days ending on June 30, 2016. Over the last 90 days (from October 28, 2016 to January 25, 2017) we’ve had 161 shootings in New Orleans, but we would have expected 172.

Ultimately, what this tells me is that the rise in gun violence since July 2016 is very real, and that there’s reason to suspect we will have more shootings than expected in the not too distant future. So either whatever began in July 2016 stops soon or we are in for an exceedingly violent 2017.

A very dramatic change in New Orleans gun violence has occurred over the last 7 months and the expected shooting count accentuates just how big that change has been. The change is not as dramatic as it was in Baltimore or Chicago in 2015 and 2016 respectively, but without reversing the trend we could see post-Katrina murder highs this year or in the coming years.