A Remarkable Slow Down in Armed Robberies 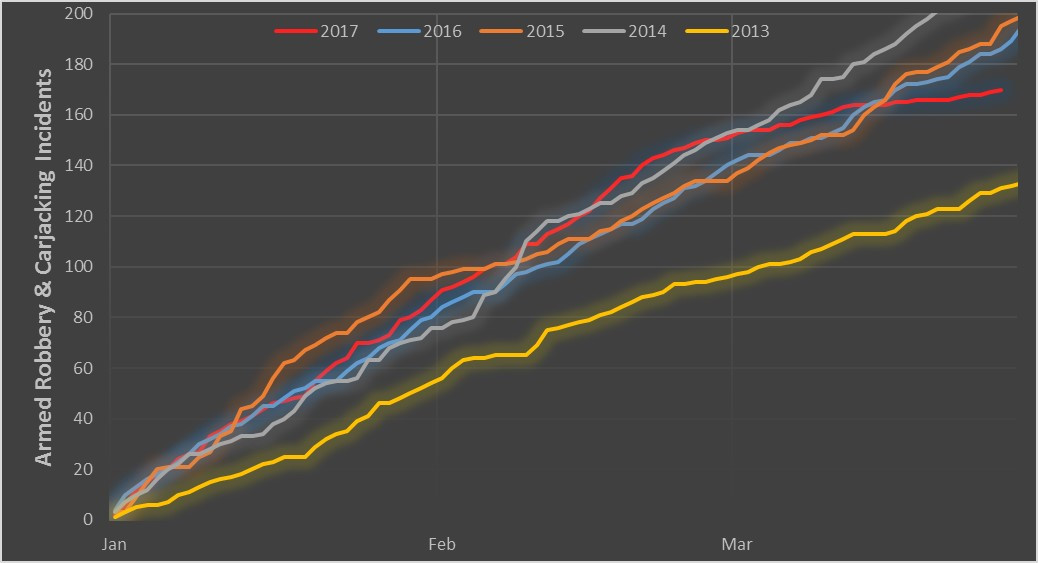 There were 151 armed robbery and carjacking incidents in the first 59 days of 2017 through the end of February continuing a trend of abnormally high robberies that began in November 2016. This isn‚Äôt too surprising as armed robberies tend to peak in November and December in a given year before gradually slowing down through the summer before picking up again.

There were no armed robberies on a given day only three times in the first two months of 2017 (January 25, February 10 and February 27), but there have been 11 days in March¬† without any. In fact, 22 of the first 26 full days this month have had zero or one armed robbery or carjacking incident.

The result is the below chart showing the number of incidents over 30 days with the 24 such incidents over the last 30 days being the lowest on record going back to 2010.

And through March 26th armed robbery and carjacking incidents are now down 8.6 percent in 2017 relative to YTD 2016 as shown on the chart below. This shows the cumulative number of carjacking incidents through each day of the year with 2017‚Äôs fast start and big slow down in red.

This is certainly a positive trend for New Orleans although March is typically a slow month and there‚Äôs little definitive evidence pointing to the trend being a permanent one. Regardless, one can certainly hope that the drop in armed robberies so far in 2017 portends to a second year of declining robberies here.