How to Measure Concentrations of Gun Violence 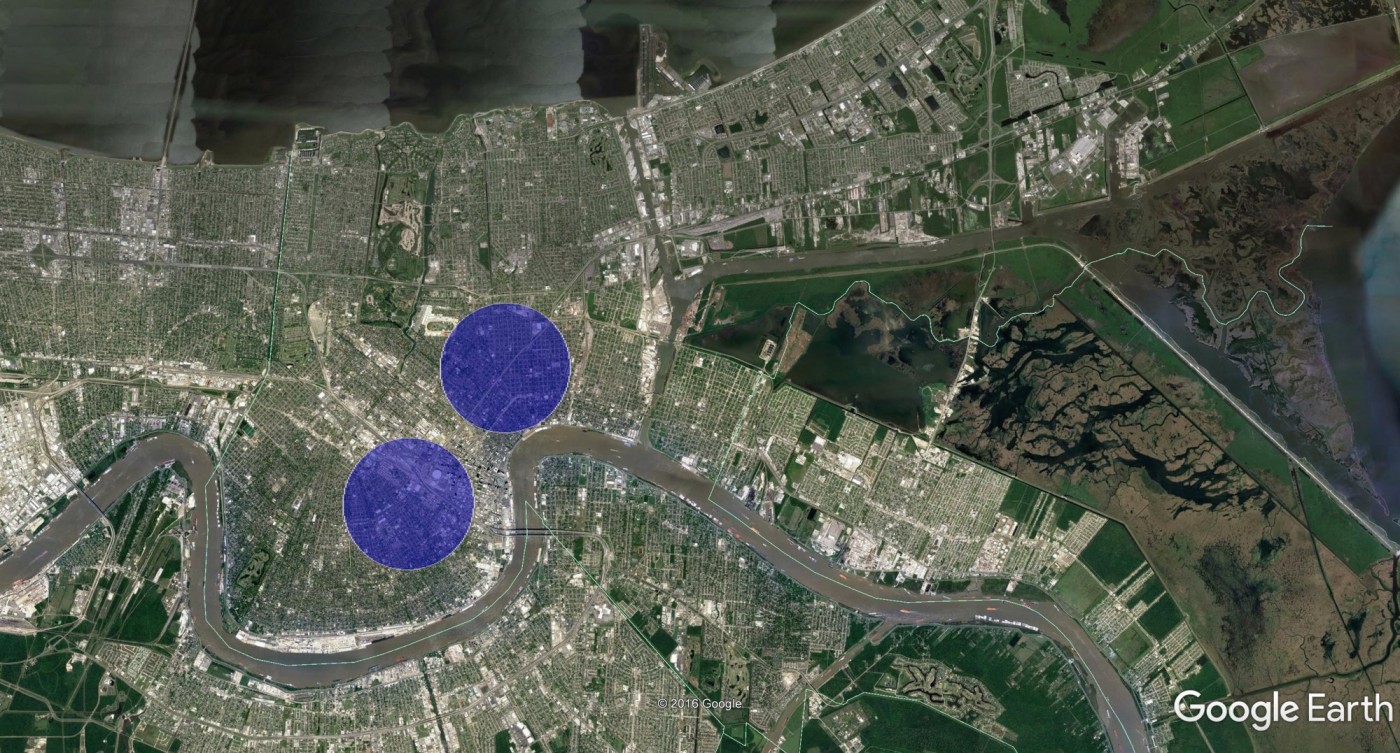 Yesterday I published a tweet with a map with two circles each with diameters 2 miles long. Within those two circles I’ve found that roughly 1 in 3 New Orleans shootings occur driving home the point that gun violence is heavily concentrated specifically within high risk people and places. As if like clockwork there was a shooting within one of the circles later that afternoon.

Sometimes the story of how assessments are made can be interesting so I figured I’d put together a post detailing how that map came to be. First off, here is a higher resolution version of the map with the circles turned from green to blue. The two regions are centered in the Seventh Ward and Central City neighborhoods of New Orleans and represent just a small fraction of the city’s overall size.

The initial step in this process is to get coordinates for every 2016 shooting. I keep a running list of every shooting with item numbers since 2010 so getting coordinates just requires access to the city’s publicly available Calls for Service database.

Next I create a grid with the lat/long of all 460+ shootings running both horizontally and vertically as seen below.

The next part is tricky and requires some fancy excel formula work. I went on the internet and found a formula that will automatically calculate the distance in miles between two points (as the crow flies). The formula is:

Repeat the process 460+ times and you get something like this:

I then went through each row and calculated the number of cells where the distance was less than or equal to 1 mile. The “top” set of coordinates were 29.97471047, -90.0644011 at the intersection of Allen St and N Roman in the Seventh Ward. A fatal shooting took place there on April 10th and there have been 86 total (fatal & nonfatal) shooting incidents within 1 mile of that point.

The other point of reference was 29.94453266, -90.08826476 at the intersection of Josephine and Clara St in Central City. A fatal shooting occurred there on September 5th and yesterday’s shooting about a quarter mile away was the 65th within 1 mile of that point.

I used FreeMapTools.com to create the fancy map. Just plug in the two coordinates, the circle’s radius you want to show and it’ll create a KML for Google Earth. Save that screenshot and you’ve got the above map.

In the end this method provides an interesting way of driving home just how truly concentrated gun violence can be in cities.

One thought on “How to Measure Concentrations of Gun Violence”