Some NOPD “Proactivity” Rebounded A Little in 2016

Police “proactivity” is a difficult concept to define, but I generally think of it as all of the stuff that police officers are able to do when they’re not responding to Calls for Service. To that end I’ve previously written about five metrics we can use to measure changing police proactivity levels: drug violations, curfew violations, suspicious person incidents, drunk driving incidents and illegal gun violations.

All of the measurements of proactivity are down significantly relative to 2012 totals. That can be seen in the below chart which shows for of the five (more on drugs in a second). Each figure represents the number of non-duplicate and non-voided Calls for Service for each incident type. The curfew fell a bit from 2015 to 2016 but that’s nothing compared to the overall 85 percent drop from 2012 levels. Suspicious person incidents similarly fell about 9 percent from 2015 to 2016 which I’ll call “leveling off” relative to big drops since 2012.

Drugs are a mixed bag. On the surface they appear to be leveling off as drug violation incidents only fell 5 percent from 2015 to 2016. Overall drug violation incidents are down 37 percent from 2012 to 2016. Digging deeper, however, shows a potentially troubling trend as marijuana possession rebounded but Schedule I & II (cocaine, opium, heroin, etc) drug violations did not. These measurements were taken using the city’s Electronic Police Report database and I teased out incident totals containing at least one offense for each category.

On the positive end, the increase in illegal gun incidents came about in large part due to a jump in felon in possession with a firearm incidents after three straight years of decline.

The below chart provides an interesting look at how each incident type has fared over time. Drugs and illegal firearms are on the upswing as NOPD gains manpower. It’s not all positive but there are definitely signs of a turnaround. 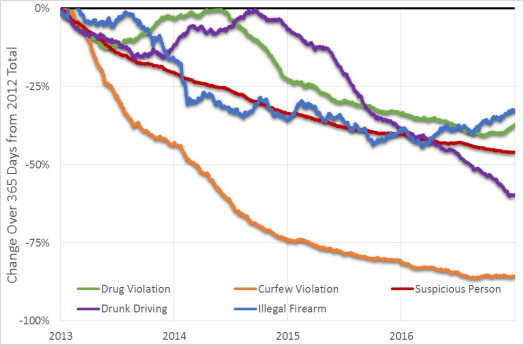