The Benefits of Fewer Burglar Alarms

The burglar alarm ordinance, passed nearly two years ago, is scheduled to finally go into effect on May 1st. As a refresher: people will receive a warning at their first alarm, a $75 fine at their second alarm, a $150 fine at their third and fourth alarms, and NOPD will stop responding after that. Burglar alarms are a gigantic time suck for NOPD considering that the vast majority of them are false alarms. There were 44,000 burglar alarm (signal 62A) Calls for Service in 2016 and NOPD dispatched an officer to nearly 38,000 of them. On average each of those calls took just over 19 minutes from the time of dispatch to the time the incident was closed.

A quick note on methodology is needed before going further: NOPD obfuscates addresses for the sake of privacy in their open Calls for Service data. To get around this I used the coordinates of each call as the address. I assume that these have not been changed and that an address will receive the same coordinates for each incident.

Overall, the 44,000 burglar alarms were made by just under 18,000 addresses, or an average of about 2.5 calls per address. Of course the distribution isn’t quite that simple.

The below table shows the number of addresses and calls at various levels in 2016.

Everything else remaining the same and implementing the false alarm ordinance would have resulted in a 25 percent reduction in burglar alarm responses based on 2016 data. That’s over 3,000 hours or 128 days of NOPD manpower saved.

The goal of the program, however, is to change behavior and reduce the number of false alarms NOPD must respond to. And the early returns on changing behavior are promising, even before the program goes into effect. The below chart measures the number of burglar alarm Calls for Service over 180 days. 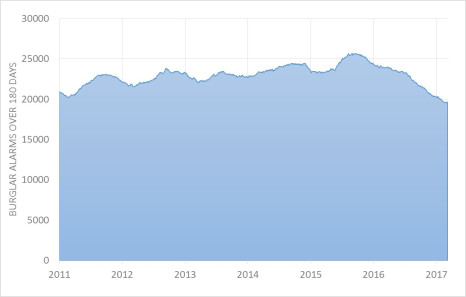 Burglar alarms are falling since mid-2015 when the ordinance was passed. It’s early, but NOLA is on pace for about 37,000 burglar alarms in 2017. That would be the first year on record with under 40,000 such incidents and would represent a 16 percent drop from last year.

The new ordinance goes into effect next month. The benefits are clear, and hopefully this post lays out how those benefits coming to fruition can be measured going forward.