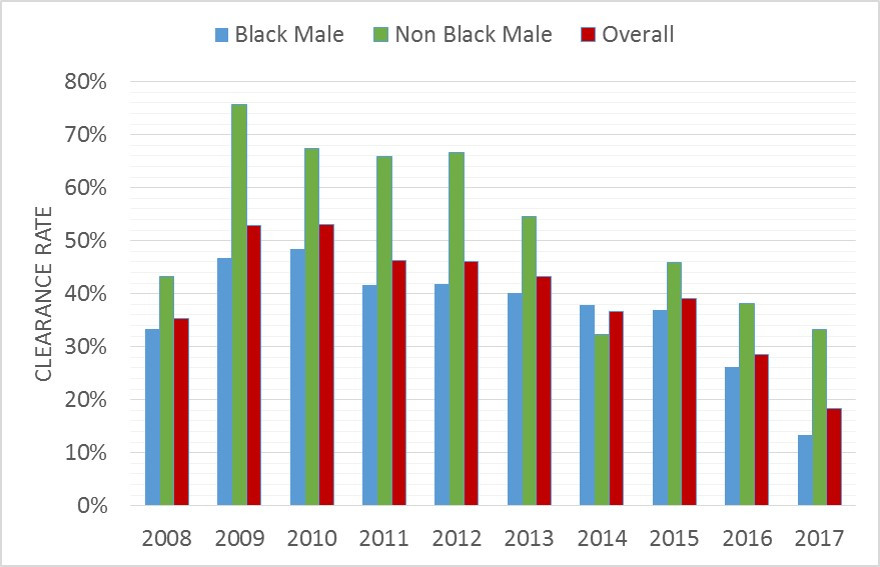 So murder is up.

On the flip side — clearances are way down. Some of that is to be expected as we are only 3.5 months into the year, so whereas a January 2016 murder has had 15 months to be solved, a 2017 murder may have had only a few weeks or days. That said, only 11 of this year’s 60 murders (18.3%) have been solved as of April 19th according to Advocate reporter Matt Sledge’s running tally. 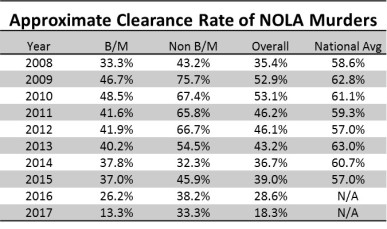 A quick aside on sources before we continue. I used NOPD homicide spreadsheets through a public records request to tally the percent of murders solved in any given year since 2008. These will differ slightly from NOPD’s official number which will, for example, count all murders solved in 2017 regardless of when they occurred. The national averages came from the FBI’s UCR program and NOPD’s manpower came from NOPD’s UCR reports for 2008 to 2014, the Civil Service Commission for 2015 and 2016 and NOPD’s MAX for 2017.

And here’s that table in graph form with just the clearance rate of a black male, non black male and overall.

Finally, one of the things that has jumped out at me is that New Orleans has had two triple murders in 2017 and neither has been solved. Because of this I decided to look at the clearance rate for murders between 2008 and 2016 based on the number of victims.

The table below shows how more heinous murders are more likely to be solved with 60 percent of murders involving 3 or more victims having been cleared since 2008. But only 1 of the 4 triple murders since 2013 have been solved and none of the 3 such incidents since October 2016 have been solved.

Failing to solve murder begets more murder. Solving whatever problems NOPD and its homicide detectives are currently having needs to be a priority for the city as step one toward reducing murder is solving the murders currently on the books.