As May comes to a close it is worthwhile to examine where New Orleans stands with UCR Part I crime. Previous posts have covered how I estimate UCR Part I crime counts and it’s worth noting that the city hasn’t published the first quarter crime official stats yet as of May 31. Using Calls for Service incident data I estimate the Part I crime is up 8.6 percent through May 30 relative to the same time period in 2016. Crime rose dramatically between 2013 and 2014 and remained largely steady at that level in 2015 and 2016. As the below graph shows, UCR Part I crime appears on pace to rise considerably in 2017 barring some unforeseen change in the YTD crime trends.

The change in UCR Part I crime since 2010 is even more striking in the below graph showing the number of these crimes over 365 days. 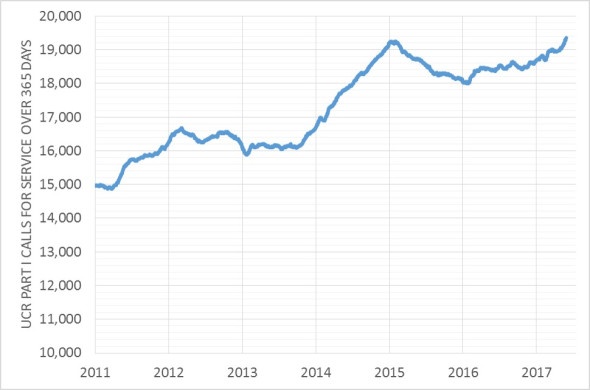 UCR Part I crimes are broken down into violent crimes (criminal homicide, assault, rape, robbery) and property crimes (arson, burglary, theft, auto theft). Comparing the types of crimes occurring in 2017 relative to the same timeframe in 2016 shows that violent crime is actually down slightly in spite of a big rise in shootings and murders. 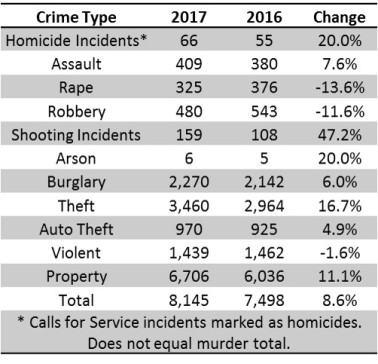 Big drops in rape and robberies is driving violent crimes down although the latter was largely due to a remarkable slow down over a single month. Property crimes, however are up over 11 percent, and property crimes make up 80% of UCR Part I crimes hence why crime is up 8.6 percent despite a drop in violent crime. 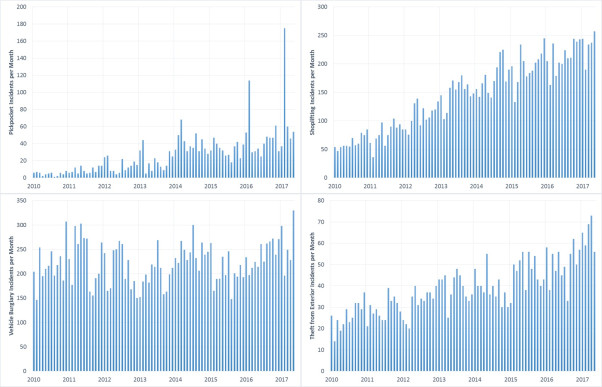 With five months in the books New Orleans appears on track for another big jump in overall crime. Much or all of the rise may be due to increasing property crime although there are still seven more months left in the year to see what happens.