Why New Orleans Needs a “Cheat Code” for Police Recruiting

The New Orleans mayoral election season is off and running and the early returns suggest that NOPD recruitment is likely to be a topic of interest. A recent NOLA.com editorial cited Forward New Orleans, a coalition of civic groups, calling for the next mayor to commit to growing NOPD by 50 officers.

Increasing NOPD’s size by 50 officers per year for several years is a worthy goal in my opinion, but our discussion should focus on new ways of growing the department because the current method simply is not solving the problem.

Lots of numbers are thrown about for NOPD’s manpower over time but those are often inaccurate. By my count NOPD shrank from 1,477 sworn officers and 41 recruits in December 2009 (source: NOPD UCR report via public records request) to 1,078 sworn officers and 71 recruits as of mid-July (source: MAX).

That’s a 27 percent reduction in sworn officers over that time.

NOPD certainly wasn’t alone in losing officers over that time as a majority of large police departments (over 500 officers) shrank between 2009 and 2015 as shown below.

Simply put: it’s difficult to hire police officers these days. The process is long and arduous and the vast majority of candidates who apply fail to become officers. In New Orleans only 2.6 percent of applicants between 2013 and 2016 became recruits. Moreover NOPD’s attrition rate has steadily been around 8 or 9 percent with nearly 13 percent of recruits failing to graduate and become officers since 2012.

Growing the department requires overcoming all of these factors.

NOPD has worked to streamline the recruitment process in order to increase the percent of recruits who make it through. In addition, pay raises in 2015 and 2017 have been enacted in order to attract higher quality candidates and reduce attrition.

Reducing attrition is a great concept in theory, but we may be close to the floor as far as sustained attrition rates for NOPD may go. NOPD has averaged 9.4 percent attrition over the last 5 years though removing a tough 2014 brings the average to right around 8.5 percent. That’s pretty close to NOPD’s average attrition prior to Katrina as shown in the table below.

One or two years of 6 or 7 percent attrition may be attainable, but sustaining such attrition over 5 to 10 years seems like a longshot.

Let’s assume we want to grow by 50 officers. Let’s further assume that we can sustain an attrition rate of 8.5 percent (12.5 percent for recruits) and 2.6 percent of applicants being accepted. Finally, let’s assume that our goal is 1,400 sworn officers which NOPD last had in May 2011. In this scenario NOPD would need to generate 55,000 applicants over the next 8 years in order to hit the goal. 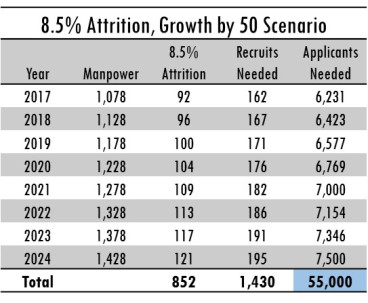 If we keep the goal at 1,400 officers but seek a more modest net growth of 30 officers per year then we’re looking at 82,000 applicants being needed over the next 12 years.

The most efficient fix seems to be increasing the percent of applicants that become recruits. Consider the below scenario where NOPD grows by 50 per year with 8.5 percent attrition by accepting just 4 percent of applicants. At that rate you would need just 4,469 applicants per year for 8 years to hit 1,400 officers. That’s right around what NOPD is drawing right now.

There are a few ways one could go about accomplishing that objective, many of which NOPD has already done. You can widen the net of admissible applicants by lowering education requirements. You can raise pay to bring in better candidates. You can hire more investigators and recruitment staff to speed up the process and pester applicants into showing up for testing. Or you can expand your local recruiting efforts knowing that local applicants are more likely to appear for testing and the rest of the hiring process.

NOPD and NOPJF have already taken many of these steps. Yet generating applicants and increasing the percentage of recruits being accepted remain major challenges.

Lowering standards may be the easiest way to accept more candidates, but it is also the most dangerous for the city. NOPD grew immediately following Katrina though the Department of Justice summarized this effort in 2011 by saying:

In more recent years, the failure to attract strong candidates appears linked to NOPD’s lack of any strategic recruiting plan, along with the pressure the Department was under to hire new police officers after Hurricane Katrina. NOPD hired hundreds of officers during a relatively short time period; one estimate is that 400 officers were hired during the three year period following Katrina. In its press to hire these officers, NOPD reportedly lowered its recruiting standards, essentially removing the physical agility requirement and asking the Civil Service Commission to score the written portion of the application less vigorously.

Rebuilding NOPD without lowering the department’s standards is going to be an incredibly difficult task.

We Need A Cheat Code

I would propose that what the City of New Orleans needs is to invent a new recruitment process which identifies potential (ideally local) candidates and actively recruits them. What we need is a ‘cheat code‘ which would bring in scores of high quality new police officers (growing through lateral transfers would be nice but adding enough to make a difference seems extremely unlikely) through non-traditional means.

Mayoral candidates committing to a number of new officers per year isn’t particularly helpful. What would be helpful is candidates coming up with novel ideas for how to re-invent growing NOPD.

Let’s not frame the police recruiting discussion around how many applicants can be brought in or what steps can be done to improve the bureaucratic process. Instead let’s frame it around how can New Orleans convince her 20-somethings that becoming an NOPD officer would be a good way to start your career.

It also needs to become a citywide task. Consider what the DOJ had to say in 2011 about the hierarchy of recruiting:

City policy decentralizes recruitment efforts among various departments and functions, primarily NOPD’s Recruitment Unit and the Civil Service Commission, and also delegates some informal authority to a non-profit entity, the New Orleans Police and Justice Foundation (NOPJF). Consequently, recruiting efforts are unfocused and reactive, and there is little accountability for outcomes. While NOPD recruiters told us they rely in part on the Civil Service Commission for recruiting, Civil Service employees told us recruitment was the NOPD’s job; they described their primary responsibility as administering the Civil Service Exam and providing administrative oversight to the hiring process. No one we spoke to identified, as their primary goal or responsibility, recruitment of high-quality applicants who share the Department’s values and can help it achieve its mission.

There’s no reason NOPD cannot grow, though doing so may require thinking outside the box. The onus of recruiting need not be laid at the feet of NOPD and/or NOPJF. Resources are obviously needed, but it would be more helpful if police recruiting became a citywide thought priority rather than just a monetary priority.

More NOPD officers under a reformed department would mean faster response times, higher clearance rates, more proactive policing, and most likely contribute to lowering crime citywide. The benefits would be spread citywide, so what is needed now is a citywide discussion of how to get the job done.